Making Your Own Rules 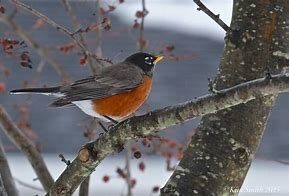 Monday morning I saw three fat robins sitting in the tree outside my front window. They seemed content even though the temperature was a chilly 25 degrees.

I wondered what in the world they were still doing in Minnesota in November, so of course, I checked Google. It turns out that not all robins migrate south for the winter. Some apparently make up their own rules!

Where to start? What to do first? I immediately thought of my meditation “practice,” a word that I use very loosely. I had decided to meditate for about ten minutes every morning and soon realized I was not following any rules. I didn’t try to clear my mind, because it was so fascinating to watch it run loudly around in circles. It was like a child who has been confined all day and was finally allowed to go outside and race around the yard shouting. It was only after the ten minute timer went off that I would finally take a few mind-clearing breaths before I got up to start my day.

I’ve also ignored most of the rules about life balance, goal setting and time management. I’d followed these rules for so many years and they seem to have only worn me down. Yet, with so many books about these rules, I certainly have felt my share of guilt. Now I do my best to build my business and expand my life by listening to my intuition and focusing on joy. Joy doesn’t seem to take extra work, and I don’t have to buy something new or schedule something more into my day.

Joy is right in front of me: watching the cat sleeping on the bed, opening a new bag of potato chips, curling up with a good book, finding my car keys on the first try, looking out my window at the clear blue sky or the full moon or the three fat robins sitting in the tree reminding I have more choices than I realize.

"It helped to know I’m not alone in this. It was nice to hear that there is life after divorce. It gave me courage."
- DK
"As I go through this season of such great fear and loss, I am holding on to the lifeline of hope you have provided."
- Carol F.
"Talking to people who are in my situation was helpful…pointers on moving forward were great, because that is what I’m doing now."
- NL