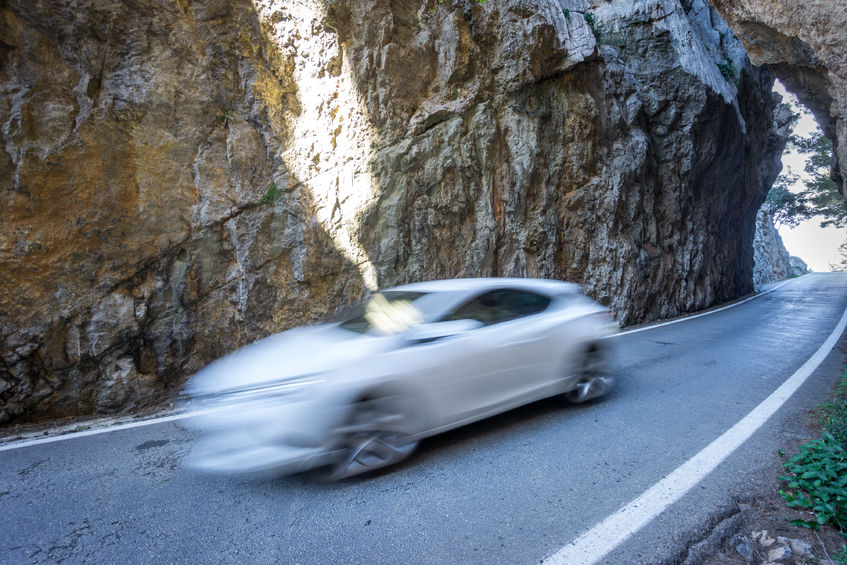 Once upon a time there was a much anticipated road trip. The sky was a perfect blue, the temperature was mild and the road was so inviting, leading to a mountain lush with tall evergreens and punctured with jagged boulders that didn’t seem threatening from a distance.

With the husband behind the wheel of a big solid car and the wife in the passenger seat, the loving couple kissed, sighed, smiled, and were on their way.

The paved road turned to dirt as it approach the mountain and was soon only a narrow ribbon curling along it’s side. If the husband had opened his window, he could have reached out and touched the unyielding mountain wall as it rose up to the sky. There was nothing for the wife to touch if she opened her window, only air and open space to fall into.

The mountain did not want to give up space for this road and the dirt became punctured with the tips of boulders poking through the dirt from below.

“Slow down,” the wife said, as her husband was a habitual speeder.

The husband did not respond and maneuvered another curve around the mountain edge.

“Slow down,” she repeated in a panic.

Again the husband did not respond.

She pleaded. She screamed. She held onto the door handle, hand aching, as if holding tightly would save her if they plunge over the edge.

Years later when sharing this story with a friend, she was asked, “Why didn’t you just get out?”

She was embarrassed to admit she had never thought she could. And then she wondered what dangers there would be if she found herself alone on the edge of a mountain in the middle of nowhere.

Three years later she did get out. She got out of a marriage where her feelings and her voice were not heard or acknowledged. She got out of a situation where she thought she would fall off the edge of her life, never to be found.

She stepped tentatively onto a road she never imagined. Eventually she stood firmly on the mountain that was a part of her journey. The mountain held her, and she felt its strength. Feeling safe at last, could see the beauty of the vista stretching out before her. She knew there may be dangers. There may be times she stumbles, but she is not longer afraid of these things…well sometimes she was, she is..and that’s ok.

"Great to be with so many women open for growth and change."
- LG
"You helped me open my eyes to so many new insights. The entire presentation was terrific."
- AC
"Thanks for all you do. It is making a huge difference for me in my new journey. "
- Toni R.